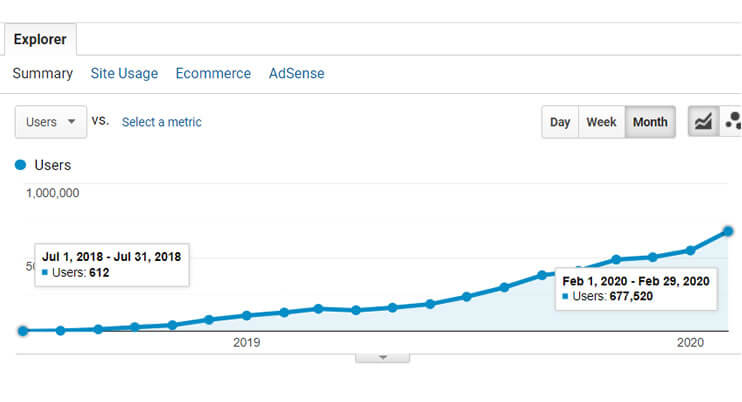 Quite the title but this case study has so much into it I had to write a long title!

Going from 516 organic visits per month to 667k visits per month in 19 months is a challenge, but more challenging is to grow the traffic by 50% in the span of days, multiple times, almost every month  — which is not happening intentionally, it’s been sort of “luck”, more on that in a second.

In this case study, you’ll discover how we did that by implementing the opposite of what the competition was doing and also implementing an “untapped” and aggressive SEO strategy that’s actually safe.

I’ll also explain how you can duplicate it (won’t apply to every business but you’ll find if it does for yours quite soon).

In fact, you may possibly know about it already and if you haven’t added it to your SEO arsenal, this could be an extra confirmation that it works.

In August 2018 I started working with a startup that has a successful app, 2nd in its category and with around 300k users per day on peak days. Now they wanted to additionally focus on search to capitalize the massive traffic potential there is.

The challenge is that the current competitor companies are very big and have 20+ years of presence online.

As you can imagine they also have a lot of authority (sounds familiar? Check my other case study from 312 to 1.2 million in 2 years).

Just to give you an idea here’s a snapshot from the top competitor — Ahrefs metrics.

** The website has a small number of pages: 57 pages TOTAL as I write this.

OK so before we dive into it, let’s log into Google Analytics and see what’s happening as well as see how the traffic grows by 50% multiple times?

Video to be updated soon.

If you have competitors that are well known, you’re in luck. You can capitalize on their brand name to drive very valuable traffic to your website (not everyone can but you’ll know if it applies to you really quick).

In some other cases, not only could you drive valuable traffic (qualitative), but a lot of traffic as well as we have seen (quantitative).

What’s the “aggressive” and “untaped” method?

Writing about your competitors. Specifically reviews.

Why is it aggressive?

Because it could be confrontational.

It depends on your niche and the behind the scenes things that go with your specific industry or company (company focus, internal politics, potential issues…).

Now to be clear.

These types of reviews are not created to bash, criticize or bad-talk about your competitors.

That would be the wrong move for you to make and it could backfire pretty quickly.

This type of review has a specific structure and it breaks down into 3 steps:

1 Feature the good stuff about the competition. The reason to do that is that talking bad about a company, brand or service is distasteful, and if they’re big brands, they have been able to become one by doing something good (sure there are exceptions).

You don’t want to be known as the company that talks bad about others.

Visitors can smell BS from a distance as well.

3 Fill the gap with what you offer. In theory, your product or service should have the good and also fill in your competitor’s weak points. Or at least have an angle that gives your company an edge over your competition.

If it fills the gap or has an edge that is good enough, you have a high probability to siphon visitors to get their credit cards out with your company instead of your competitors.

The Nike Shoes Review You Always Wanted To Read

Now, this may or may not be a good example, so how do you know if you’re on the right path?

We did something that may or may not be obvious. It’s based on how Tim Ferriss chose his 4-hour workweek book title: Running ads.

We run a couple of hundred bucks in Google Ads to see if people were interested.

And they were, so we wrote the content afterward.

That’s how we’re getting a lot of growth and traffic, ranking for competitor’s keywords and bringing people to the business instead of having them go to the competition.

IMPORTANT: BE CAREFUL about the content, the ad, what you say and so forth. Do your due diligence unless you want to get sued. Here’s an article about it.

How did traffic grow by 50% a lot of the weeks? — If you watched the video you already know :).

I mentioned it was “luck” and the reason why is because we didn’t intend to do it. We didn’t say:

Let’s see if we can grow traffic 50% consecutively multiple weeks every month!

But it happened. It’s kind of “simple”.

We got multiple featured snippet for the biggest keywords we’re targeting, sometimes in multiple languages.

I mean, imagine getting a snippet for “Nike shoes”… or “best Nike shoes” like these guys have in their affiliate site:

According to Keywords Everywhere they have 12,000 searches per month.

That’s pretty much what happened.

There was no snippet before (and it obviously had a pretty short life span).

** By the way, talking about featured snippets, look at what I found doing some keyword research on January 27th. Have never seen a double snippet so big on Google before.

Ready To Take Your Business To The Next Level?